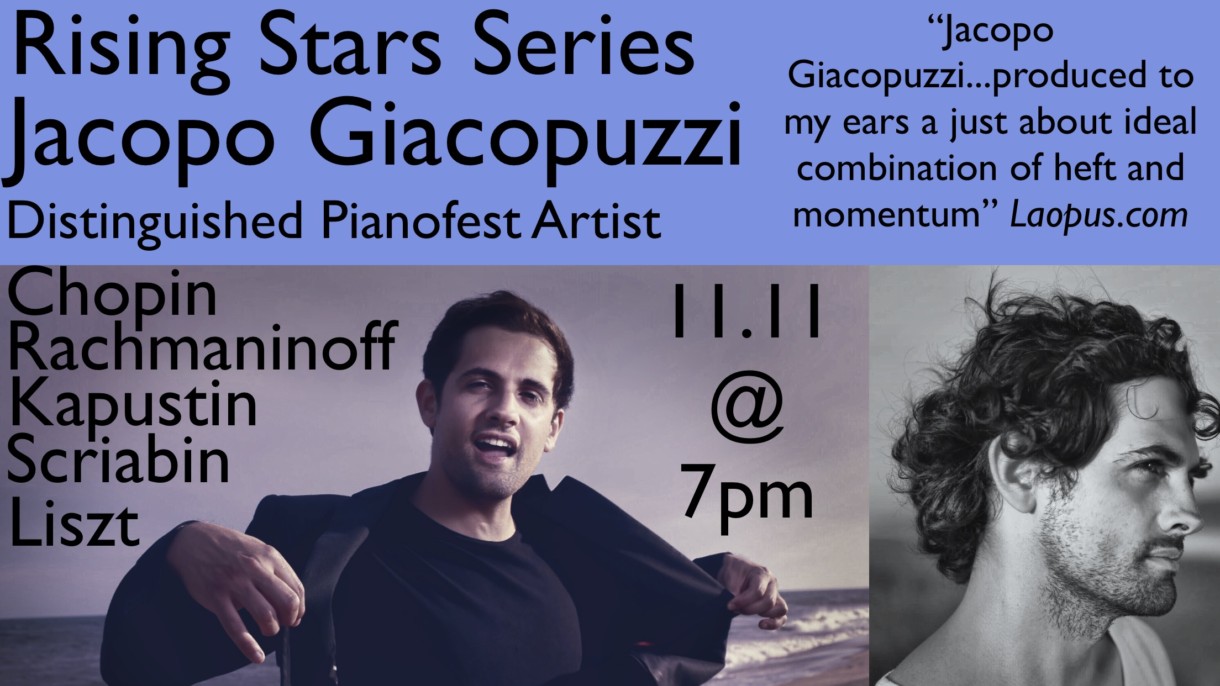 We are so excited to welcome back one of the brightest stars in our constellation - Jacopo Giacopuzzi! His passionate pianism and disarming charisma made him an instant hit at Pianofest and Rising Stars Series and we just had to have him back this season. This time round he will dazzle us with a Romantic and Jazzy repertory featuring Scriabin, Liszt, Kapustin, and Rachmaninoff!

Jacopo is also a gifted and successful video producer making popular webisodes for Pianofest's youtube channel as well as the I Palpiti festival in Santa Barbara, CA, and his own music videos.

Jacopo has performed recitals at major festival and venues throughout the United States and Europe. Born in Italy to a family of pianists, Jacopo studied in Weimar at the Liszt Hochschule, earned his first Master`s Degree cum laude in Piano performance in 2009 under the guidance of Virginio Pavarana, a Master`s in Sound Design with Mauro Graziani at the Conservatory of Verona in 2012, and obtained a Diploma at the International Piano Academy of Imola Incontri col Maestro with Leonid Margarius in 2014. He completed his studies as a graduate in Piano Performance at the University of Southern California (2016) with Professor Kevin Fitz-Gerald.

Jacopo is a winner of 14 international competitions including the International Piano Competition San Dona` di Piave, Premio Crescendo in Florence, International Liszt Competition in Los Angeles, and the Beverly Hills National Auditions. He has taught at the Conservatory of Verona E.F. Dall Abaco (2012 - 2014), worked as a collaborative pianist at the Royal Conservatoire of Brussels (2010), and has been invited to serve on competition juries and to give presentations and concerts throughout California.

After attending the Music Academy of the West in Santa Barbara for a number of seasons, Jacopo found himself embraced by this loving community and makes Santa Barbara his home, surfing at sunrise before heading to his piano.