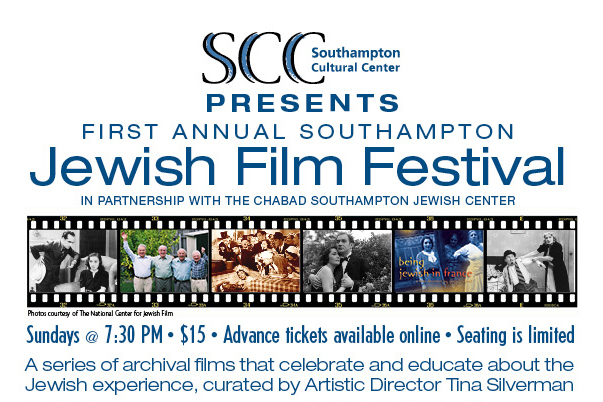 in partnership with the Chabad
Southampton Jewish Center
The Southampton Cultural Center and Southampton Chabad are partnering to present the first annual Southampton Jewish Film Festival, July 5 – September 6, 2015. The opening night of the film series – curated by artistic director Tina Silverman – will feature Broadway and TV star June Gable, currently the lead in “Picon Pie,” a tour-de-force theater production celebrating 80 years of renowned actress Molly Picon’s life, in a discussion about Mamele, the first film in the festival starring Picon. Films will be screened on Sundays at 7:30 PM and tickets, $15 a piece, can be purchased online at www.scc-arts.org

“A Jewish film festival is more than just a showcase for the Jewish experience, it reflects the journey of all humanity in the face of tough odds and threats, at times of great celebration and unfettered joy,” said SCC Chairman Tom Knight and Rabbi Rafe Konikov of Southampton Chabad. “We are thrilled to be partnering to bring this unique film series to the Southampton community and beyond, exposing our neighbors to these historic and groundbreaking artistic achievements.”

The Southampton Film Festival will include: Mamele; Orchestra of Exiles; Kol Nidre; His Wife’s Lover; The Rape of Europa; The Cantor’s Son; Being Jewish in France; Zahor; Buchenwald Ball; Jews of the Spanish Homeland; The Last Marranos; and Exodus. Full schedule, with film descriptions, can be found below:

Orchestra of Exiles • July 12 (2013) 85 minutes
Orchestra of Exiles explores Polish violinist Bronislaw Huberman’s 4-year odyssey, which culminates in the founding of the orchestra that would become the Israel Philharmonic Orchestra.

The Rape of Europa • August 2 (2006) 118 minutes
Beginning and ending with the story of Gustav Klimt’s famed Gold Portrait, this is the story of Nazi Germany’s plundering of Europe’s great works of art during World War II and Allied efforts to minimize the damage.

The Cantor’s Son* • August 9 (1937) 90 minutes
Moishe Oysher in the title role of a wayward youth who makes his way from his Polish shtetl to New York’s Lower East Side where he is “discovered” and becomes a well-known singer. Includes rare glimpses of the Lower East Side and of 2nd Avenue Yiddish theater marquees of the period.

Being Jewish in France** • August 16 (2007) 185 minutes
A three-hour documentary film about the history of Jewish life in France from the 19th century to the present day.

Zahor(Remember)** • August 23 (1996) 22 minutes
Zahor (Remember) -pronounced Zah’or with a hard “h”, is a short film dedicated to keeping alive the memory of Jewish individuals and families who were the victims of Nazi persecutions, those who survived and those who did not.

Buchenwald Ball** (2006) 52 minutes
The story of 45 orphans who escaped the Holocaust and found their way to Australia after their liberation from the Buchenwald concentration camp.

Jews of the Spanish Homeland* • August 30 (1929) 13 minutes
This 1929 documentary film contains close-ups of the leading Balkan Sephardi rabbis of the time and rare footage of Jewish schools, residential quarters, synagogues, and cemeteries as well as a sampling of Sephardi religious customs.

The Last Marranos** (1991) 64 minutes
Despite being forcibly converted to Christianity in 1497 many of the Jews of Portugal continued to practice Judaism in secret. Today, residents of the village of Belmonte practice an amalgam of Christian and Jewish rituals.

Exodus • September 6 (1960) 208 minutes
Few motion pictures can approach the grandeur of this classic Hollywood epic adapted from Leon Uris’ best-selling novel about the rebirth of a people and a nation. This epic film is based on the events that happened on the ship Exodus as well as events dealing with the founding of the modern state of Israel. Exodus takes place during the turbulent year of 1947, when the British government blocked the way of desperate emigres who sought to reach the Promised Land.