Center Stage organizes the energies of artists and theatre lovers, and provides a venue for seasoned actors and emerging stars. Productions include plays, musicals and Broadway concerts for which the SCC’s lauded performance space, the Levitas Center for the Arts, provides an elegant venue. With combined talents and resources we are rejuvenating the local theatrical landscape and helping to advance Southampton Village’s Arts District.

Past Performances This Season

A Delicate Balance, by Edward Albee premiered in 1966, and won the Pulitzer Prize for Drama in 1967. The play and it’s revivals went on to win a Drama Desk Award and three Tony Awards. In A Delicate Balance, Agnes and Tobias, a wealthy middle-aged couple, and Agnes’s witty live-in alcoholic sister have their complacency shattered when longtime friends Harry and Edna appear at their doorstep, claiming an encroaching, nameless “fear” has forced them from their own home. They are soon followed by Agnes and Tobias’s bitter 36-year old daughter Julia who returns home following the collapse of her fourth marriage. These events bring a firestorm of doubt, recrimination and ultimately solace, upsetting the “delicate balance” of Agnes and Tobias’s household. 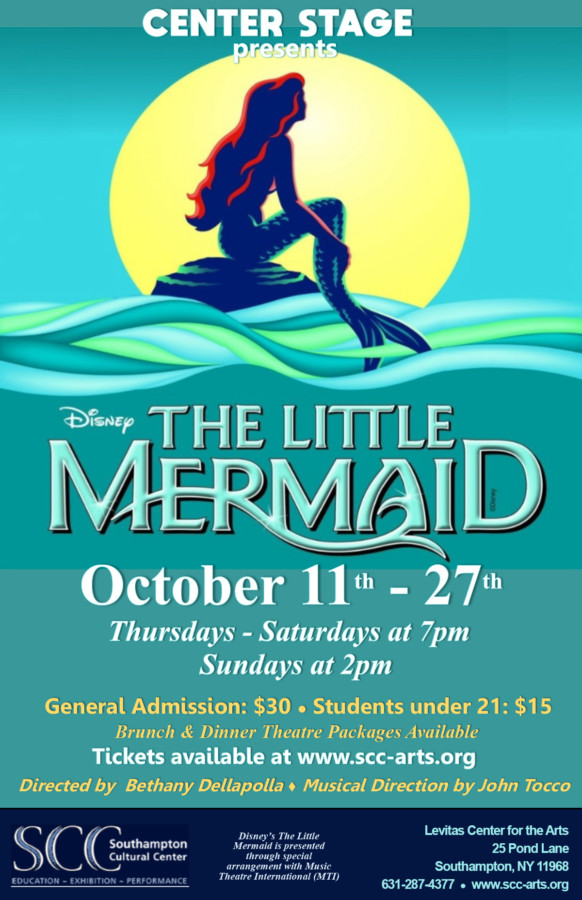 Based on one of Hans Christian Anderson’s most beloved stories and the classic animated film, Disney’s The Little Mermaid is a hauntingly beautiful love story for the ages… Ariel, King Triton’s youngest daughter, is fascinated by life on land (a place her father has strictly forbidden). One day, while sneaking up to the surface, Ariel witnesses a shipwreck and rescues a young man, Prince Eric, with whom she becomes instantly smitten! Frustrated by her father’s inability to understand her and fueled by her love for the prince, Ariel runs away and strikes a deal with Ursula the sea witch to get the life she’s always wanted! But the bargain is not what it seems, and she will need the help of her friends Flounder, Scuttle, and Sebastian, in order to restore order under the sea… With music by eight – time Academy Award winner Alan Menken, lyrics by Howard Ashman and Glenn Slater, and a compelling book by Doug Wright, this fishy fable will capture your heart!