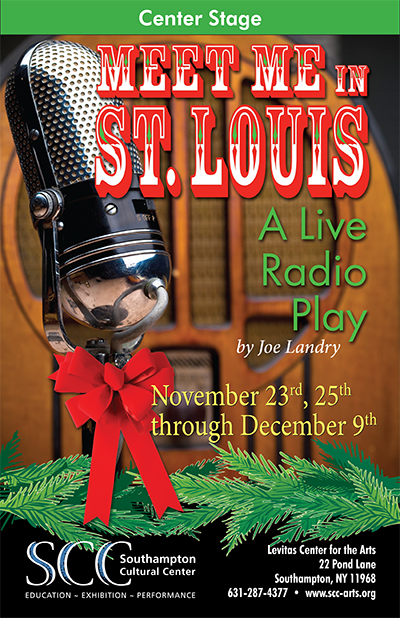 Auditions begin promptly at these times. Late arrivals will be seen at the discretion of the directors. Vocal and dance audition required. Readings from the script will also occur. Sides will be provided.

Landry’s radio play is adapted from the book by Hugh Wheeler.

“I am thrilled to be continuing this holiday tradition of presenting Joe’s timeless and humbling nostalgic whispers of gentler times,” said Disher. “Featuring our greatest technology – imagination, Joe effortlessly transports us through sounds and spoken word. And in this case, with a familiar score, to boot.”

Based on The Kensington Stories by Sally Benson and the MGM motion picture Meet Me In St. Louis, starring Judy Garland, Meet Me In St. Louis: A Live Radio Play features songs by Hugh Martin and Ralph Blaine, including the classics "The Boy Next Door," "Skip To My Lou," "The Trolley Song," "Have Yourself A Merry Little Christmas" and "Meet Me in St. Louis."

Casting is flexible. Actors must cover several roles, so vocal dexterity is required. The available roles to be covered are:

Those auditioning should prepare 16-32 measures of Broadway standard, suitable clothing and shoes for a dance audition and a flexible schedule. Most rehearsals are scheduled